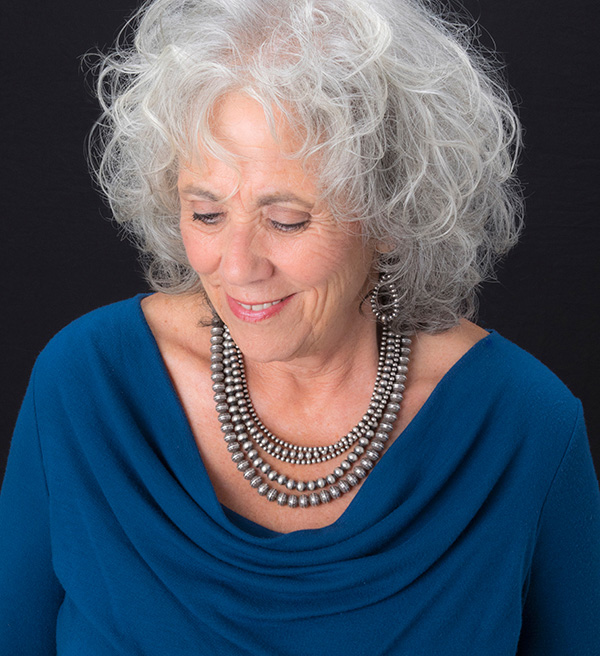 The Formative Years
As a child, I would sit beside my father and watch him sculpt shadow boxes out of balsa wood. He would create street scenes of the old west complete with café, post office, feed store, and hitches for the horses. I remember him painting a woman’s face on a bar room floor from a classic western saloon in Central City, Colorado. I would sculpt next to him but I wasn’t able to make the shapes look anything like his.

I was inspired by my father, Irving Isaacson, to create things with my hands—paintings, drawings, sculptures, and papier-mâché relief maps of the Rocky Mountains. He always encouraged me to experiment with new characters, interesting materials, and a variety of techniques. Little did I know that I was learning lessons about characterization, design, color, and shape that would define my own work later in life. The magic of his artistry passed on to me as I began to make puppets, shadow box collages, fetishes, charms, and paintings.

Art and Personal Transformation
I believe that self-awareness is the key to becoming an authentic and powerful person. This has led me to a rewarding process of matching my inside story with my outside life story. Early on, I realized that I could view challenging moments as opportunities to become empowered rather than victimized. And so, adversity has been one of my greatest teachers. It has provided me with the chance to get to know myself.

The constant theme in my life has been the path of the artist. By consciously experiencing, working with, and expressing my inner and outer obstacles, I have been able to unleash my passion and use it to cultivate wholeness and creativity. My commitment to pursue the creative path guided me toward building confidence and authenticity. My creative urge has taken different forms over the past 50 years:

The Clown Years
When I received my Master’s degree in Communication and Speech Pathology at New York University, I became a teacher of deaf children. At this time, my lifelong mentor, Judith Sarchielli, suggested that I take a mime class to enhance my teaching. I called my mother and I said, “Guess what. I’m going to become a clown.” There was dead silence on the other end of the phone “You’re going to become a what? A clown? Wherever did you get that idea?”

Now, this was Jewel, my mother, who when I was a little girl would go to the bakery, buy a dozen chocolate chip cookies, throw the box away, put the cookies on a cookie sheet, and warm them up in the oven to generate a wonderful smell. When I came home from school, she would say, “Don’t touch them, they’re hot!”; and here was Jewel asking me where I had gotten the idea to become a clown? All I can tell you is that something very strong grabbed hold of my heart when I started mime classes. I felt so alive. I had to follow this tug wherever it was going to take me. 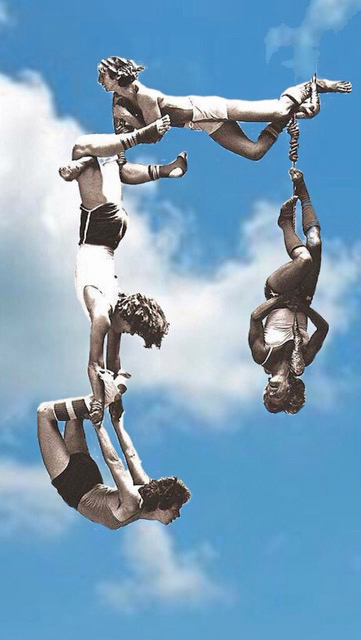 Next thing I knew I quit my job, sold all my belongings, and moved to San Francisco to pursue creativity. The next 20 years found me immersed in improvisation, aerial dance, puppetry and theatrical clown work. I flew through the air in Fly by Nite, an all woman trapeze company under the direction of Terry Sendgraff. I developed a process of creating clown characters based on externalizing my insecurities. Clowning gave me ways to express hopes, fears, and hidden craziness by forming a clown character. I used my own suffering to heal and make other people laugh at the same time. This unique approach to creating personal clown characters enabled me to explore the place of vulnerability where the funniest and most touching clown persona reside.

I created five characters over a period of 20 years, based on my natural inclinations of movement, voice, gestured habits, inner feelings, and stories. The treasured Clown School of San Francisco, which I founded, became home to many people from all walks of life who wanted to create their own personal clown characters.

Each season of my life, a new character would emerge: Boo-lu was my first character. She was a feisty single mother who traveled with five white baby dolls with red noses, all named Baby Kaka. Each vignette told a story about the love/hate relationship between the mother and her babies. Then came Mimi the Clown. Me! Me! She was based on my tendency to be a narcissist. Mimi was a character who made a lot of mistakes as a way to deal with being a perfectionist. She would say, “Oh, you’re right, you’re right,” you’re right”, you’re right!” “How do you know? How do you know” How do you know?” Baby Fatty helped me come to terms with my body image and food issues.

In my early 50’s, Ms. Lotta Bucks appeared to help me face my fears of growing older. She was an expert in cultivating “inner beauty” and counseled women about retirement. She taught them how to invest their “socks in the sock market and wash them grow!” And, finally, out popped Mrs. Milton, whose favorite advice is, “Just remember, dearie, it only matters what other people think!” 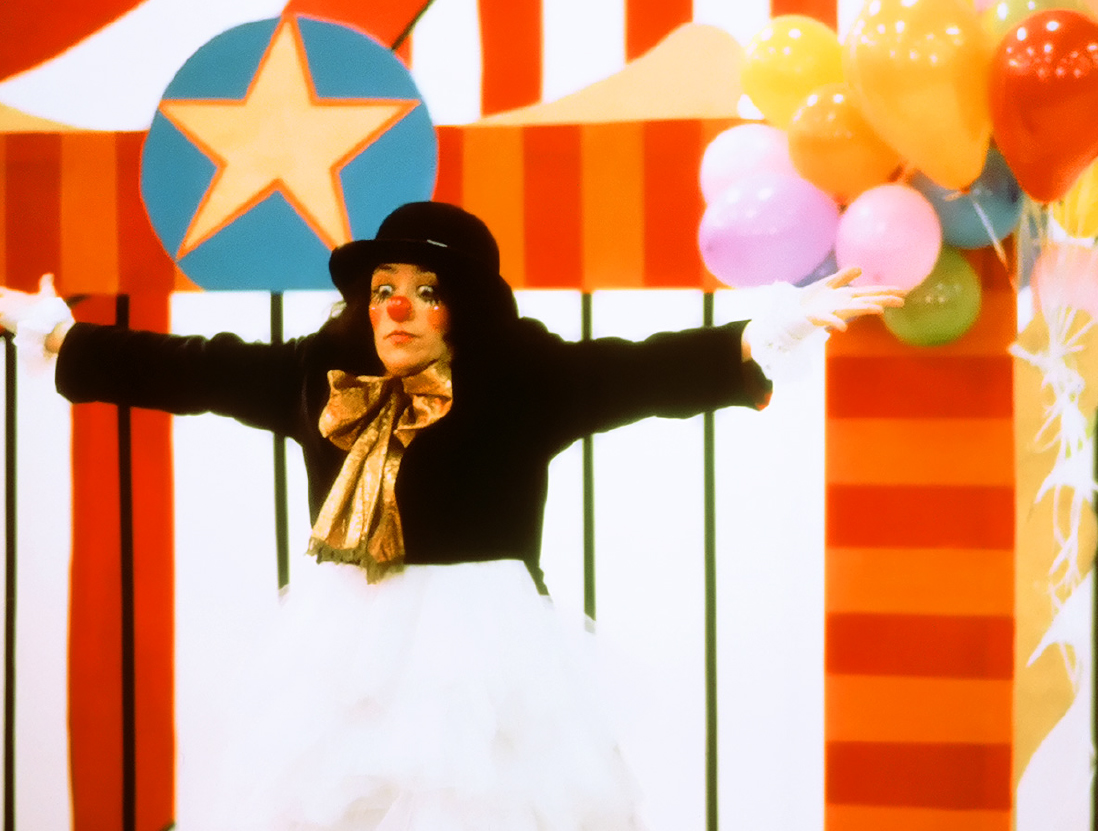 The Sacred Art of Puppetry
I was introduced to the world of sacred art by Cassandra Light of The Way of the Doll, along with Karen Vogel and Vicky Nobel of The Mother Peace Tarot. We sat together in a collaborative community circle where the first “mythic dolls” were created: 9 women, 9 dolls, 9 months.

It was in this circle that I began to experience the power of visualizing my dreams and visions and healing my deepest wounds. The sacred art pieces that I created held the energy of my dreams. My inner landscape helped form sacred artifacts—mythic performing dolls; fetishes, charms, amulets, and shadow boxes. Each piece represented a different intention or prayer.

Each of the eight performing dolls holds a unique and personal statement. The feet, hands, and face are sculpted out of porcelain with a fully articulated internal skeleton made of dowels and round beads. The spine is constructed from the inner tube of a bicycle tire then filled with wooden beads to allow complete movement during the performance. Each doll has seven chakras. In Sanskrit, chakra means wheel. Each of the seven wheels radiates vibratory energy throughout the body, from the base of the spine to the top of the head. The chakras are made of small crystals, beads, flowers, feathers, poems and prayers written on Chinese rice paper, woven circle baskets, Mexican Milagros, waxed linen string, colorful fabrics, semi-precious stones, or shells. They are embedded deep within each doll, never seen by the viewer, but radiating nonetheless. The skin is made of raw silk. Each creation was costumed to play a role, just like an actor in a theater.

From 1980-1995, Doll Story Theater based in Berkeley, California, and Paris, France, performed with a cast of 12 doll characters and two actor-puppeteers. The company performed creation myths, fairy tales, stories, monologues, and a selection of music that included arias from La Traviata, French accordion pieces, and Italian love songs. The manipulation of each doll was inspired by the highly stylized, ancient Japanese theater form called “Bunraku.” The manipulators carried the dolls onstage and are visible, although dressed entirely in black.

Sets and props are kept to a minimum. The manipulators move very simply, thus the elegant movements of the dolls are strikingly apparent.

My Gift to You
Over time, I came to painting, creating spirit journals, and vision storyboards. My lifelong art journey has been about the healing aspects of art, ritual, and theater. This process has helped me wake up to life! My artwork is the deepest manifestation of my gratitude for the gift of life. And now I would like to share it with you.
~ Arina Isaacson